Honda’s Gold Wing is the zenith of motorcycle touring. Whether you’re running to the local convenience store for a Slurpee, or traveling across the American Southwest for a getaway weekend, few streetbikes are as capable as the Gold Wing Tour DCT ($29,300 as tested).

Editor’s note: Get up to speed on the technical improvements in the Honda Gold Wing Tour Gets a Touch-up for 2021 article. Also read and watch the 2020 Honda Gold Wing DCT MC Commute Review for added insight on this model.

Honda’s 2021 Gold Wing Tour becomes an even more capable travel partner as we learn in this review. (drew ruiz/)

Radically overhauling it for the 2018 model year, Big Red went in a leaner and meaner direction with its Wing. So much so that it skimped on cargo capacity inside the 13.2-gallon top case. Owners complained, and Honda answered by increasing the capacity by nearly 3 gallons.

It may not seem like a huge change, but the compartment now easily swallows two full-face helmets, of any make. The case would accept two helmets before, but they had to be of a certain model and size, and you had to insert them just right. 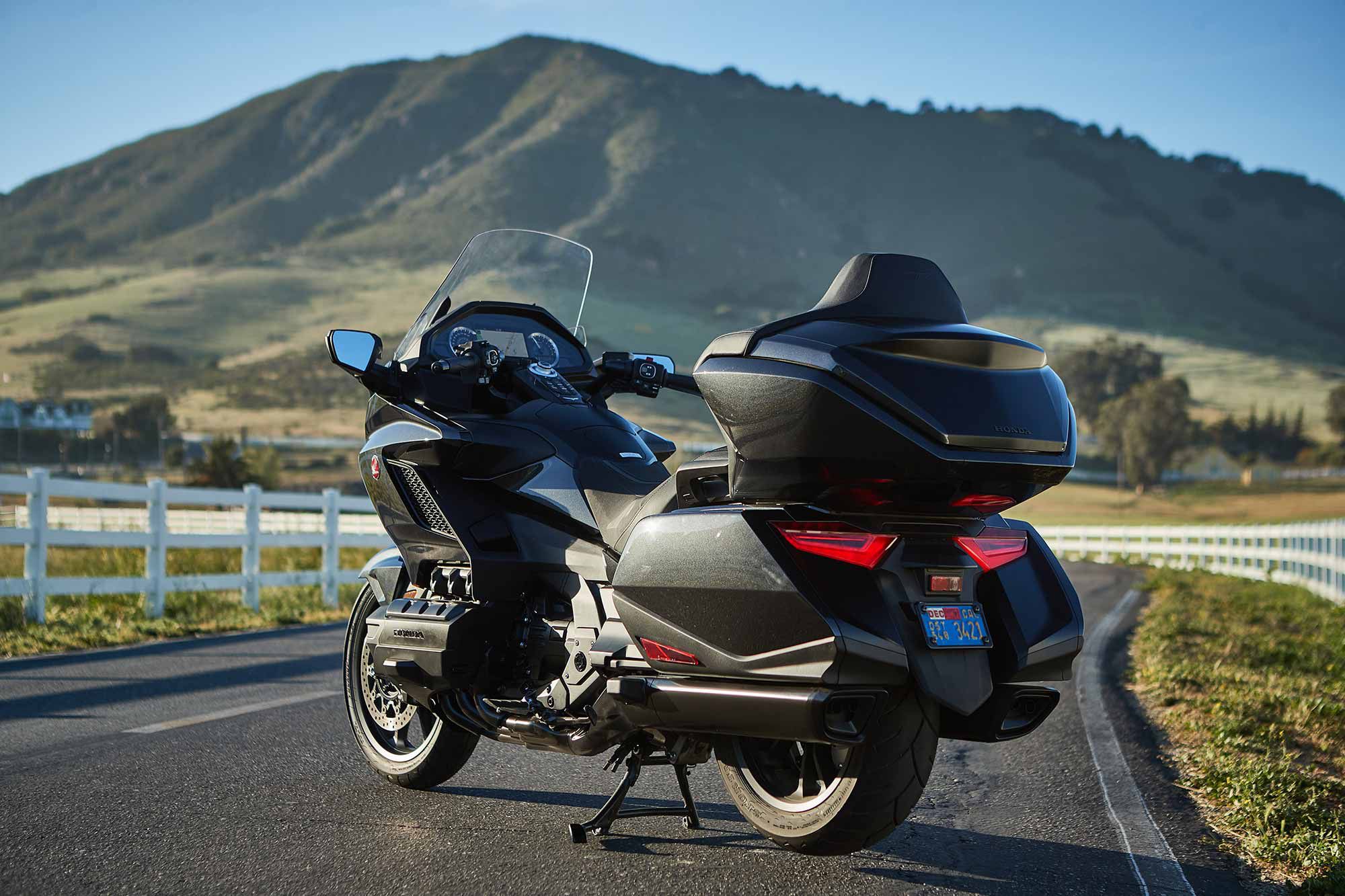 Additional fixed hard luggage is located on either side of the rear fender, though they are oddly shaped (rectangular and not very wide). The cases are opened via subtle push-buttons and are locked electronically via a nice-looking rectangular shaped electronic key fob. Hydraulic action makes for smoother operation. Our only gripe is that the cases are finicky to close. A dashboard-mounted indicator lets you know if they are fully shut. In total, the Hold Wing Tour offers nearly 32-gallons of cargo capacity. The redesigned top case also allowed engineers to tweak the passenger backrest. It’s nearly 2 inches taller, a tad thicker, and positioned at a more relaxed angle. Both rider and passenger seats have nice-looking and more grippy suede covers. Both seats have electronically adjustable heaters. This along with the rider’s heated grips make riding in chilly weather more comfortable. 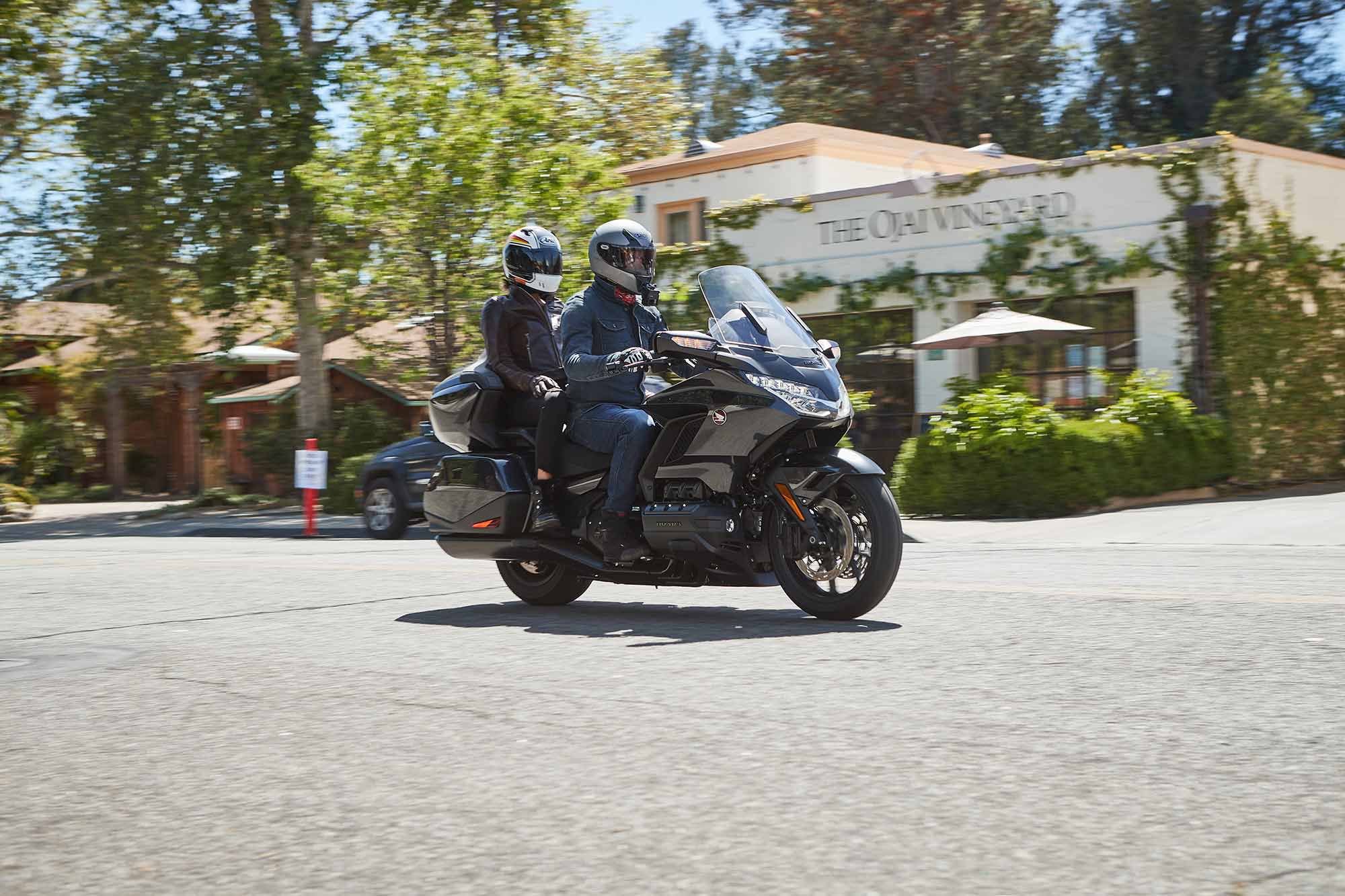 Pair that with the generously sized and electronically adjustable windscreen, and the Gold Wing elevates itself to one of the most cozy rides for short and long-distance trips. Other creature comforts include a more powerful 45-watt four-speaker stereo. An XM radio antenna is now standard too. Apple and Android smartphone compatible carry over as does Bluetooth. There’s also an AM/FM tuner.

Keeping tabs on everything is a 7-inch color dash display that integrates GPS-enabled navigation and vehicle and audio settings. It’s manipulated by a series of buttons on the raised clip-on-style handlebar and a joystick wheel on the center console. 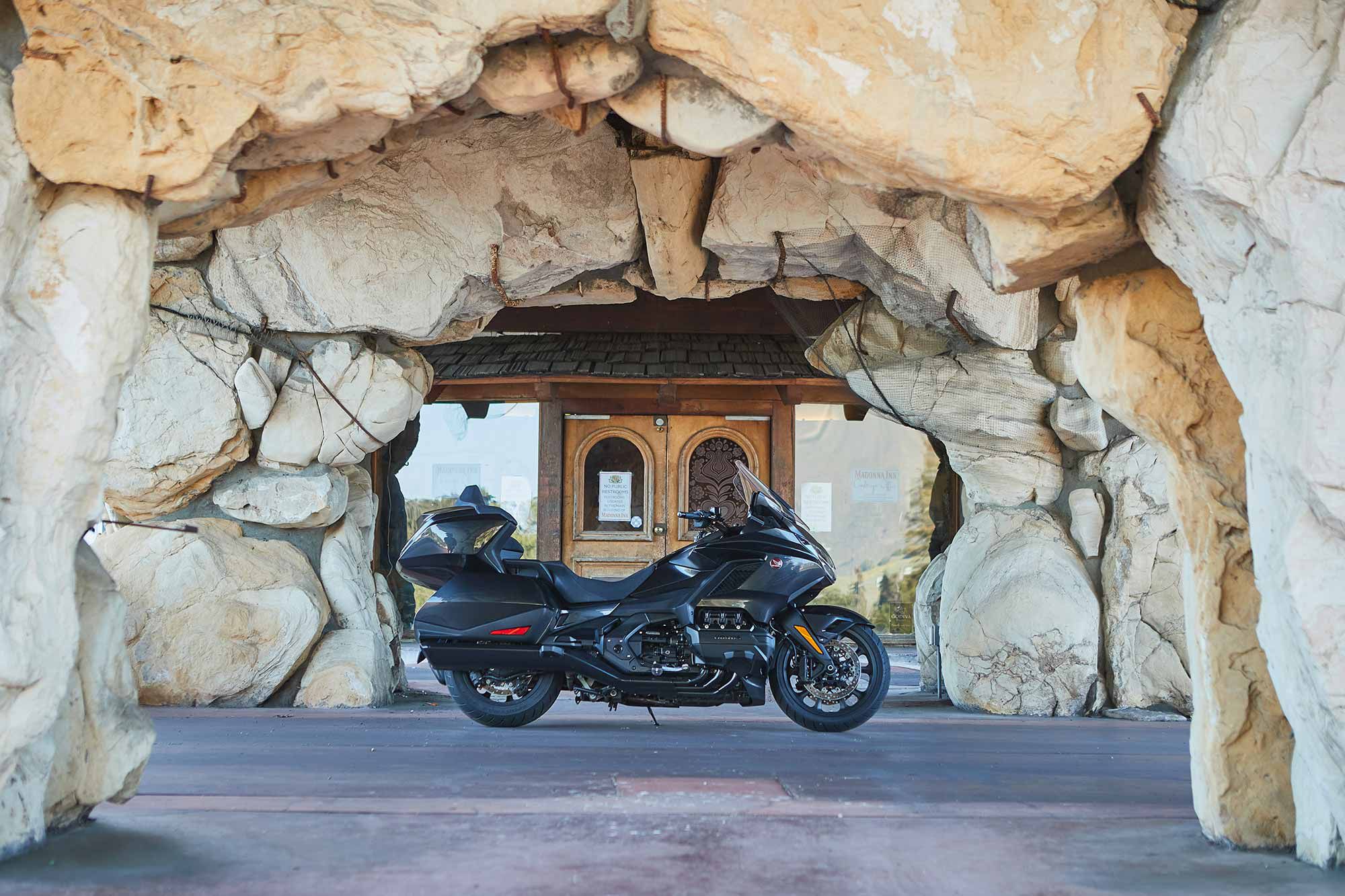 When it comes to road touring, no other motorcycle offers the type of capability of a Honda Gold Wing Tour. (drew ruiz/)

The display is bright and easy to read, day and night. However, we wish it offered a traditional “dark mode” like modern iOS-powered devices. Menu navigation is clunky and the system could offer faster boot time when the engine is started. All modern Honda motorcycles (2018-plus Gold Wing, 2020-plus Africa Twin, 2021 CBR1000RR-R) could benefit from more well-thought-out and intuitive user interfaces.

Twist the throttle however and our nit-picky gripes fade away as quickly as the objects in the nice sized rearview mirrors. With upward of 100 pound-feet torque from 1,300 rpm, the Wing accelerates in a hurry—especially for a bike that weighs 838 pounds. The cockpit fills with a rowdy roar and the exhaust note purr is equally pleasing, sounding like a six-cylinder Porsche. Horsepower-wise the 1,836cc flat six pumps out 90 hp at 5,400 rpm. 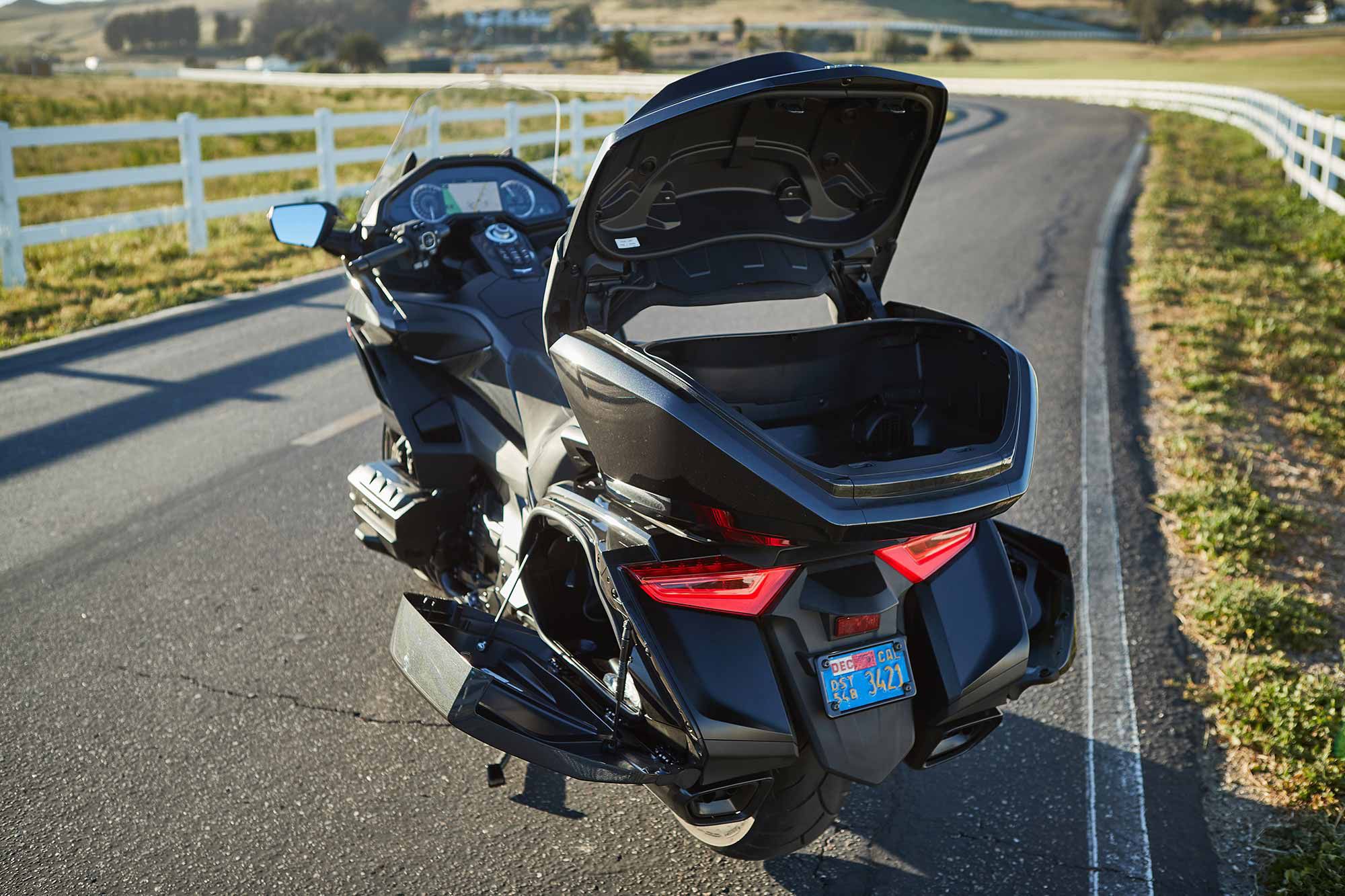 The top case is bigger in each direction. It can swallow an additional three gallons of cargo. (drew ruiz/)

It’s a downright hoot to run up through the seven-speed gearbox—especially in DCT trim ($1,000 upcharge). This option replaces the manual six-speed transmission with a fully automated seven-speed version that eliminates the traditional clutch lever. This makes the Wing as easy to ride as a scooter.

Riders can still shift manually via finger-actuated and trigger-like buttons. However, the transmission shifts gears so quickly, especially in Sport mode, that you’ll never shift more quickly than the machine. 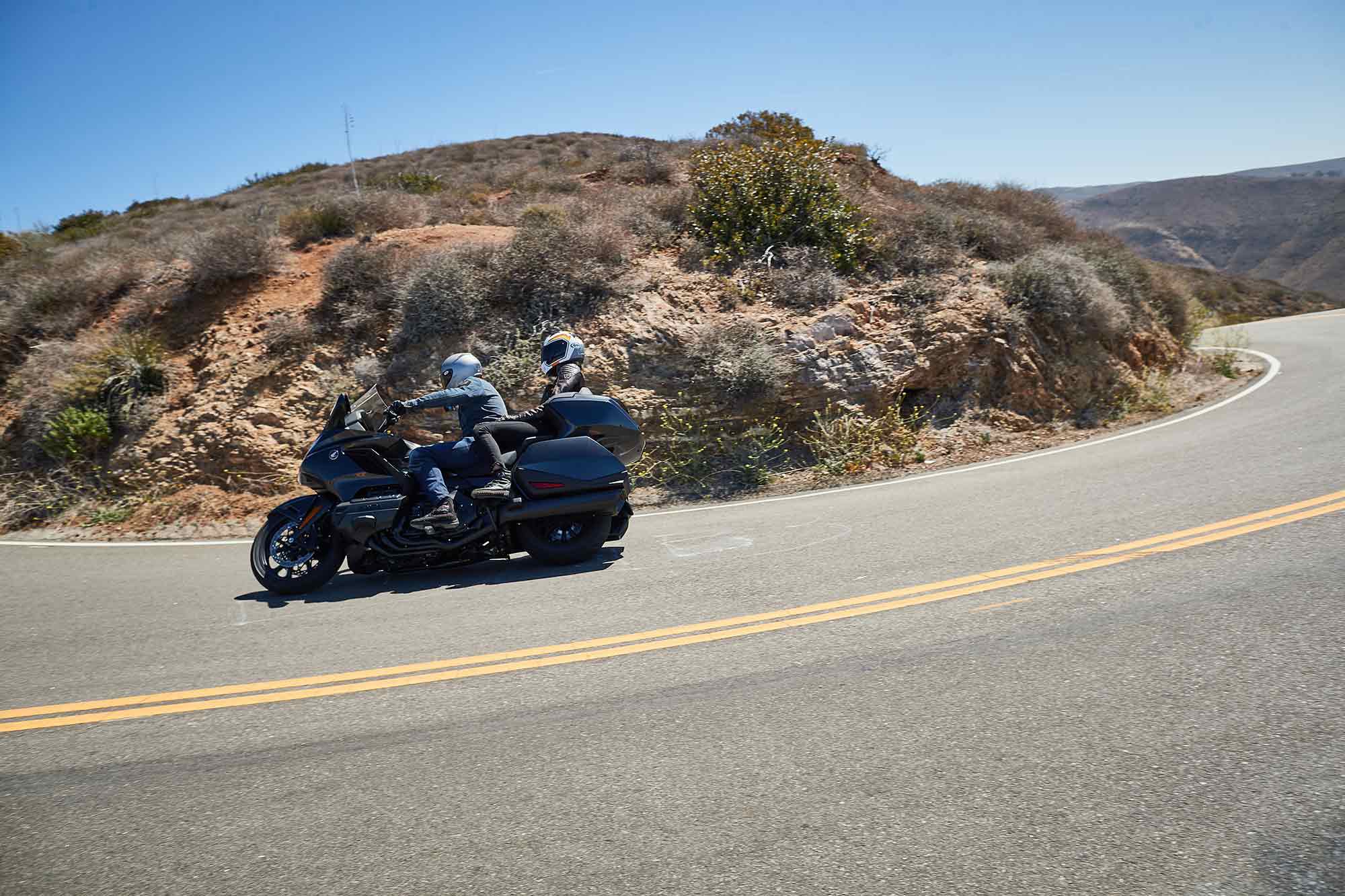 Despite weighing 839 pounds with a full tank of fuel, the Gold Wing feels 100s of pounds lighter with wheels in motion. (drew ruiz/)

The other three riding modes (Tour, Econ, and Rain) offer different shift maps. Overall, the Tour setting is our favorite as it is paired with more moderate throttle response. We wish Honda offered the ability to tune engine power, throttle response, and the shift maps independently. Easy-to-use push-button electronic reverse is also standard, which helps you maneuver in and out of tight parking spots. A manual cable-actuated parking brake keeps it from rolling when parked.

Even during high-speed rides, we consistently record around 38 mpg, impressive based on average speed and size. We also appreciate that the engine runs on regular 87-octane pump fuel. We do yearn for a larger-capacity fuel tank. 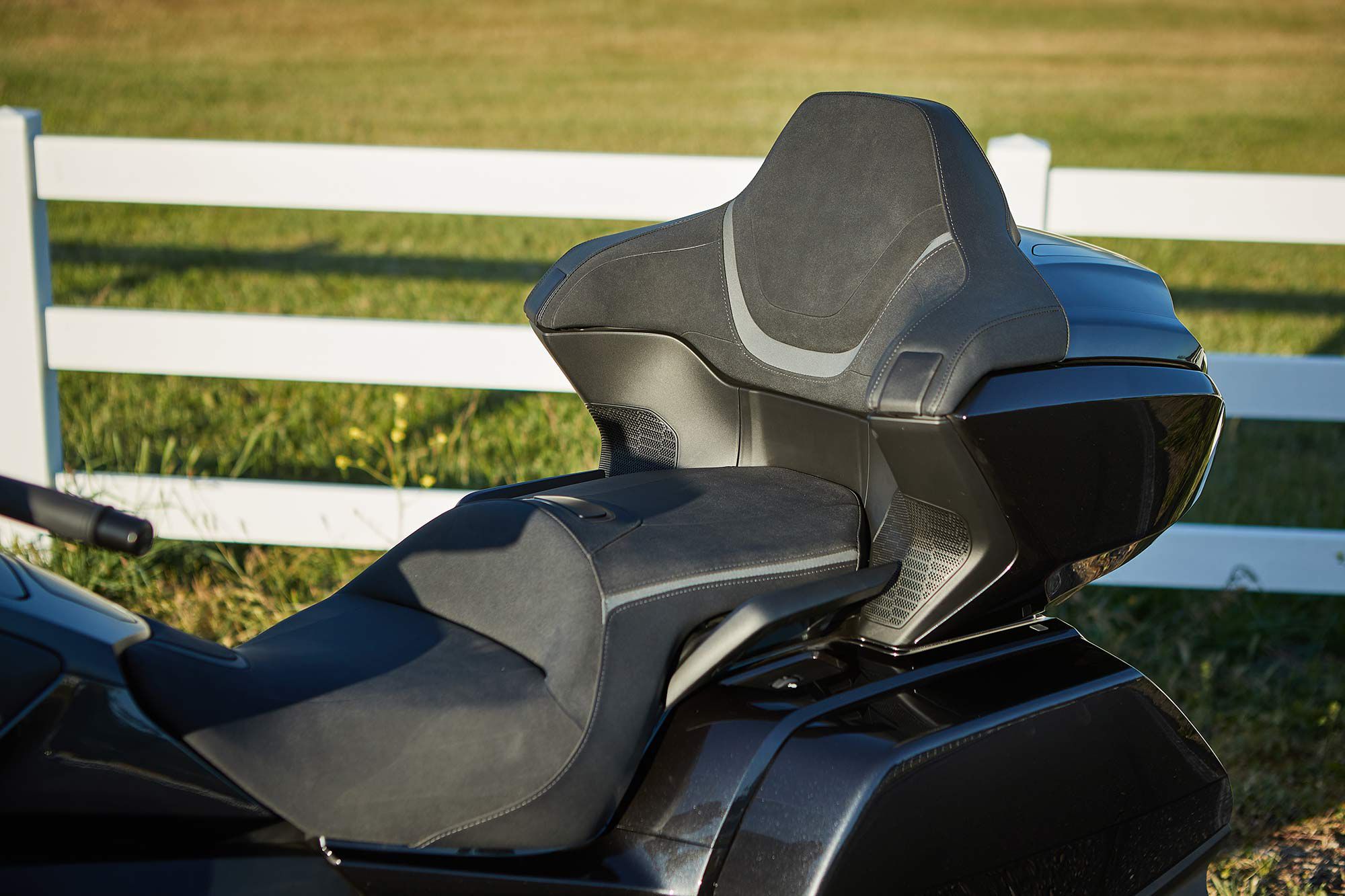 The Gold Wing Tour comes outfitted with a premium suede rider and passenger seat. It’s about as comfy as a motorcycle seat gets and is well-suited to long days in the saddle. (drew ruiz/)

For the modern year-round motorcyclist, Honda’s Gold Wing is a game changer. With its soaring level of comfort, for both rider and passenger, and more ample storage, it’s a motorcycle that checks a lot of boxes. Run errands around town, travel 500 miles in a day to your favorite vacation spot, or hustle it through the twisties with your special someone. The Gold Wing does it all, and performs like few sport-touring bikes can. 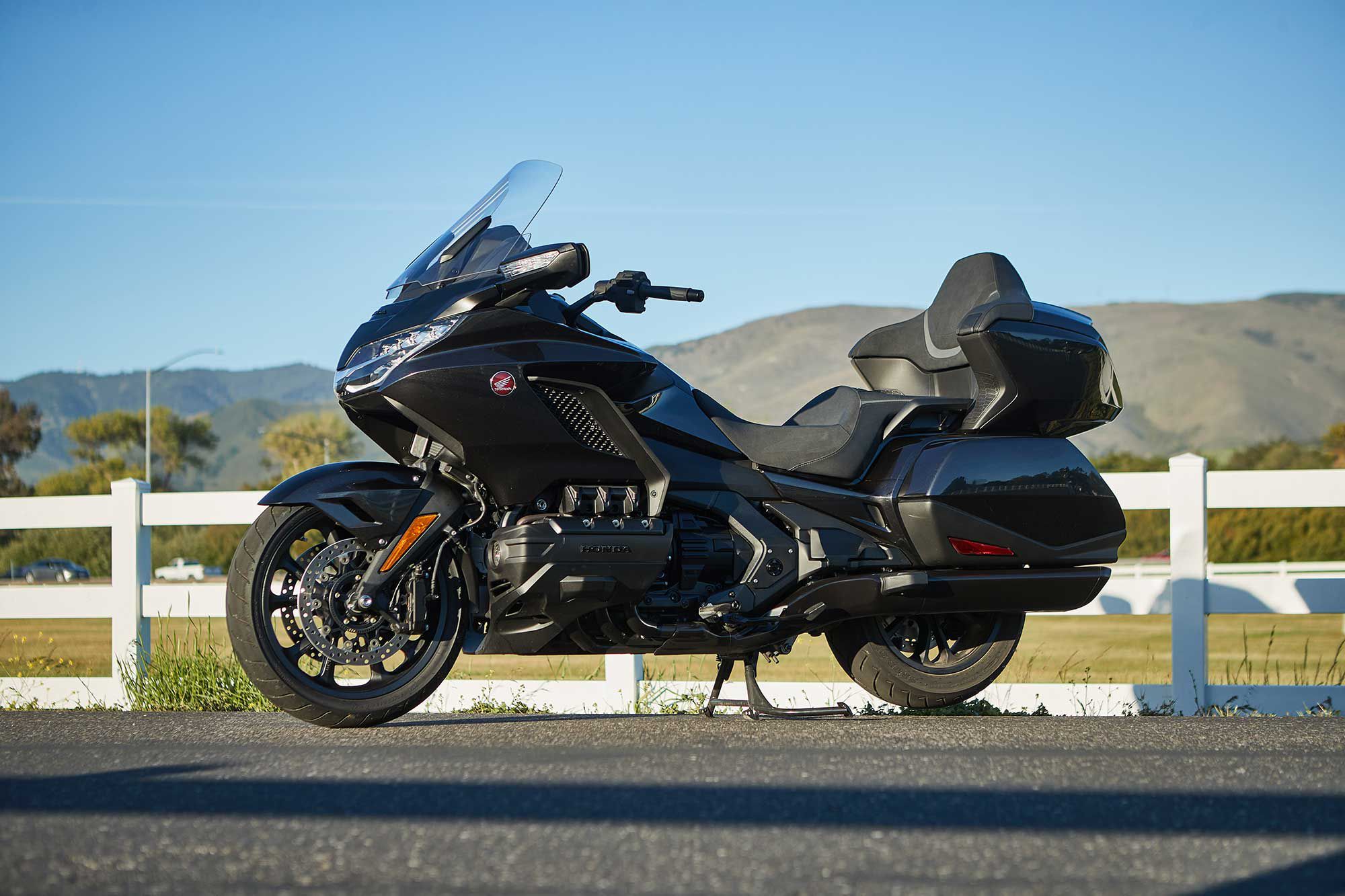 Honda’s $29,300 Tour DCT impresses not only with its touring credentials, but with its versatility. This is a do-it-all street bike. (drew ruiz/)