Six consecutive World Superbike championship titles has earned Kawasaki the right to call its superbike platform “good enough.” But Team Green never settles, as the Ninja ZX-10R and up-spec ZX-10RR have undergone functional evolutions for 2021. At stake isn’t only providing the trusted hands of Jonathan Rea the best possible platform to take lucky number seven, but the effort at revitalizing its place in the production superbike market.

Editor’s note: We reported on this Ninja’s technical details in the 2021 Kawasaki Ninja ZX-10R and ZX-10RR First Look Preview article. This review is from its US press introduction. 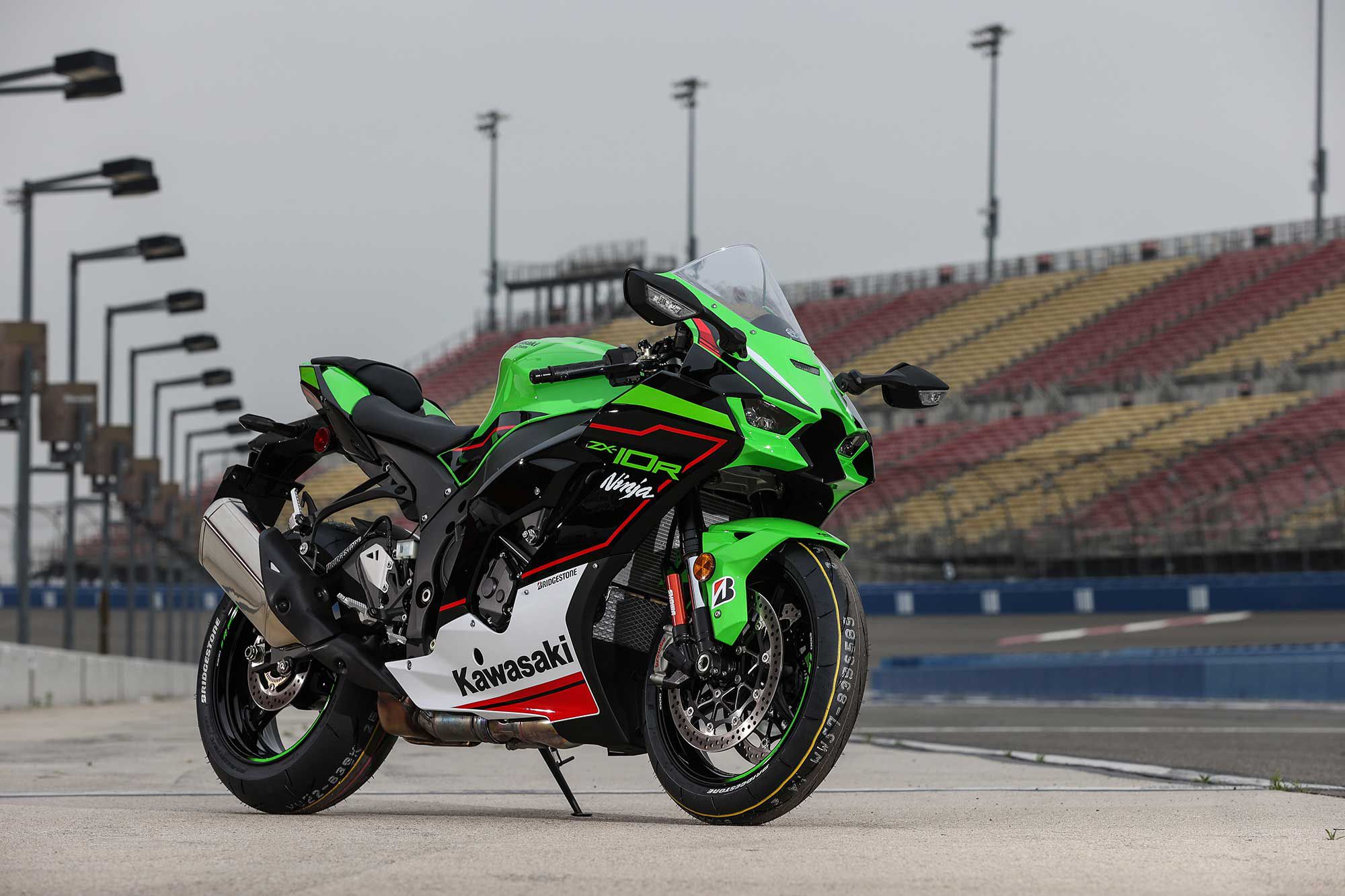 New-generation Ninja styling includes a broader fairing with improved wind protection. Aerodynamic drag is said to be improved by 17 percent while downforce is increased by 7 percent. Win-win. (Brian J. Nelson/)

As with the previous overhauls of the Ninja ZX-10R sportbike, Kawasaki emphasizes its relentless development to improve outright performance while making the motorcycle easier to ride fast. To achieve this, it focused on revamping the chassis with a focus on improving a balance of high-speed stability and quick-turning agility while also improving traction at corner exit. This includes fork offset being increased by 2mm, with the change working in conjunction with an 8mm difference in the chain adjuster (the chain length has been increased from 114 to 116 links). Overall wheelbase increases 0.4 inch (10mm). The swingarm pivot has also been lowered by 1mm with the aim of improving traction, and internal settings of the 43mm Showa Balance Free Fork and Balance Free Rear Cushion shock have been optimized for better feel and cornering.The geometry changes are said to shift the front-to-rear balance forward by 0.2 percent to improve handling.

Mechanical changes to the existing 998cc inline-four powerplant are minimal. The most significant change is the addition of a new air-cooled oil cooler that’s been developed based on feedback from the KRT WSBK squad. The rear sprocket (now larger at 41 teeth instead of 39) and internal gear ratios of the six-speed cassette-style transmission have also been revamped for racetrack riding, providing stronger low-end acceleration. A new exhaust system also helps maintain power output while improving emissions. 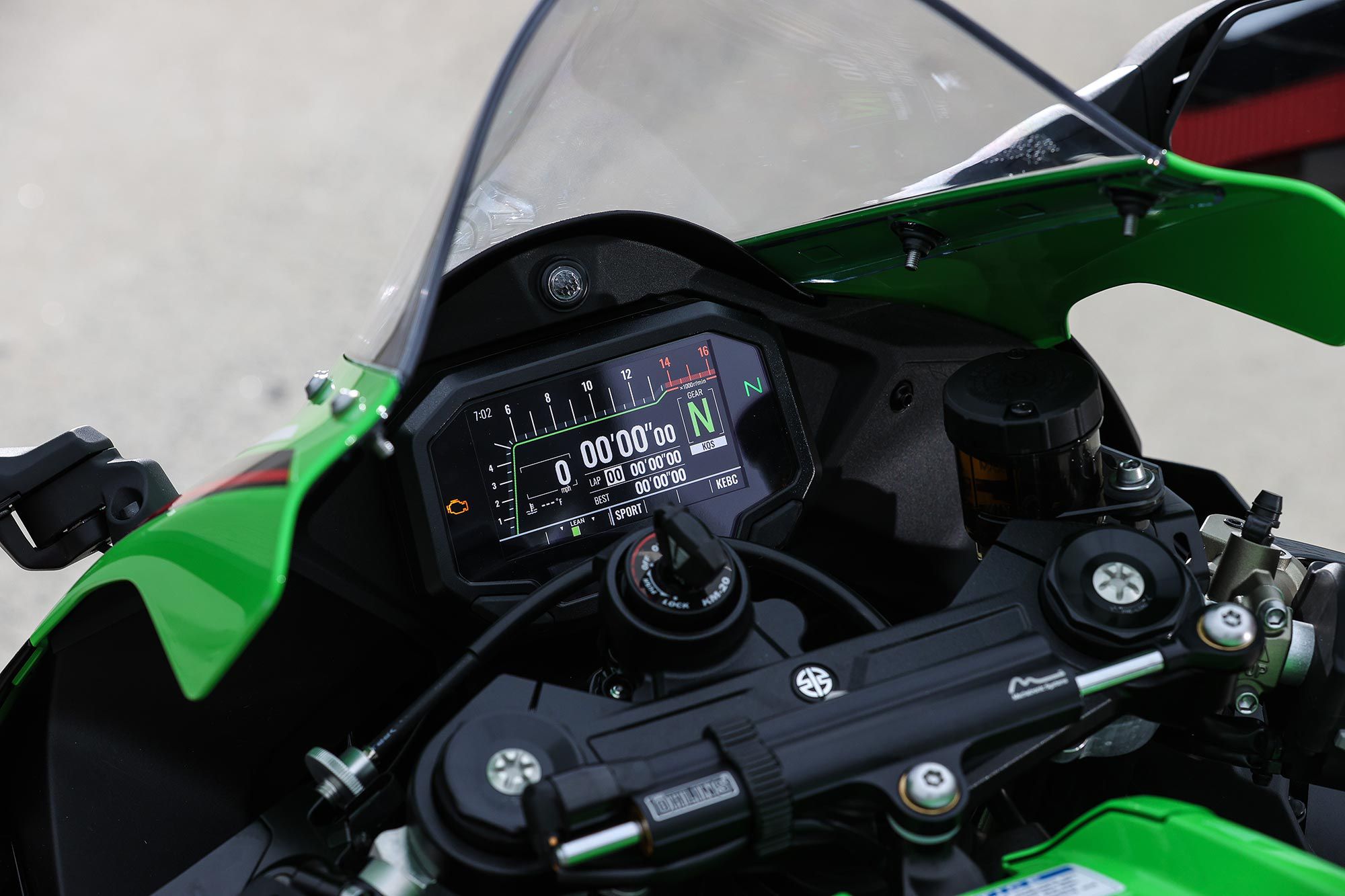 Team Green updated the Showa Balance Free Fork with revised internal damping settings and spring rates for 2021, improving upon one of our already-favorite forks available on a production motorcycle. (Brian J. Nelson/)

Attending the US press launch at Southern California’s Auto Club Speedway offered an opportunity to sample the ZX-10R at speed around the challenging 21-turn, 3.4-mile circuit. Fitted with Bridgestone Battlax V02 racing slicks and ABS disabled, the Ninja was in track trim.

“Easier to ride fast” held legitimacy, as the balance of agility, stability, and positive chassis feel instilled confidence in all areas of track. The Showa fork and the geometry revisions were of particular interest and provided an impressive feedback and improved stability under hard deceleration on approach to turns 3, 5, and 12. These sections also put the combination of the ZX-10R’s engine-brake control and slipper clutch to the test. Utilizing the autoblip (clutchless) downshifter while toeing through downshifts minimizes mental exertion and displays of drama or instability on corner entry. It’s a similar scenario while flicking through the wicked-fast side-to-side transition of turns 1 and 2 while descending the NASCAR banking, but it hasn’t lost any agility. Confidence is at a high. 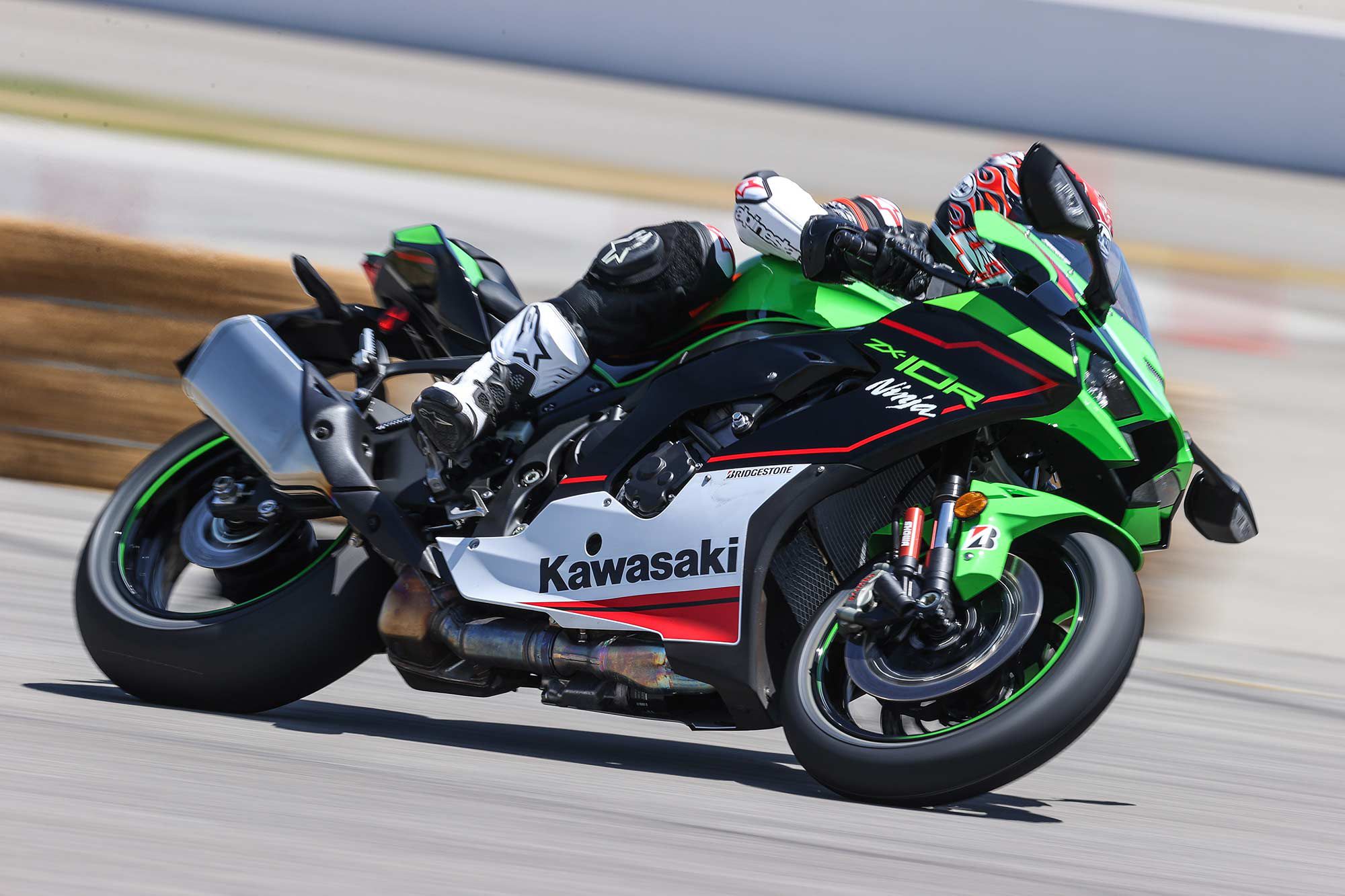 The ZX-10R is brought to a halt by a pair of Brembo M50 Monoblock four-piston calipers and radial-pump master cylinder, yet Kawasaki ditched the steel-braided lines for rubber construction for cost savings. While outright power seems more than capable for track stints, the required effort at the lever to take advantage of full stopping power seems arduous, and poor feel limits understanding of how much power is being applied. An upgrade to an aftermarket pad and steel-braided lines may be needed for riders looking for a more aggressive feel.

Initial power delivery was aggressive and borderline abrupt in Full power mode, while connection to the rear tire was slightly numbed by the full ride-by-wire system in comparison to its predecessor. Delicate throttle input is required to avoid a harsh on/off transition, but is followed by linear power delivery throughout the midrange and a rush of acceleration as the ZX-10R rips toward its 13,700-rpm redline. Smooth, almost seamless TC intervention in the least intrusive level 1 (besides off) was welcomed in laying down maximum acceleration. The combination of rideability and exhilarating performance is what makes the Kawasaki so quick around the racetrack. 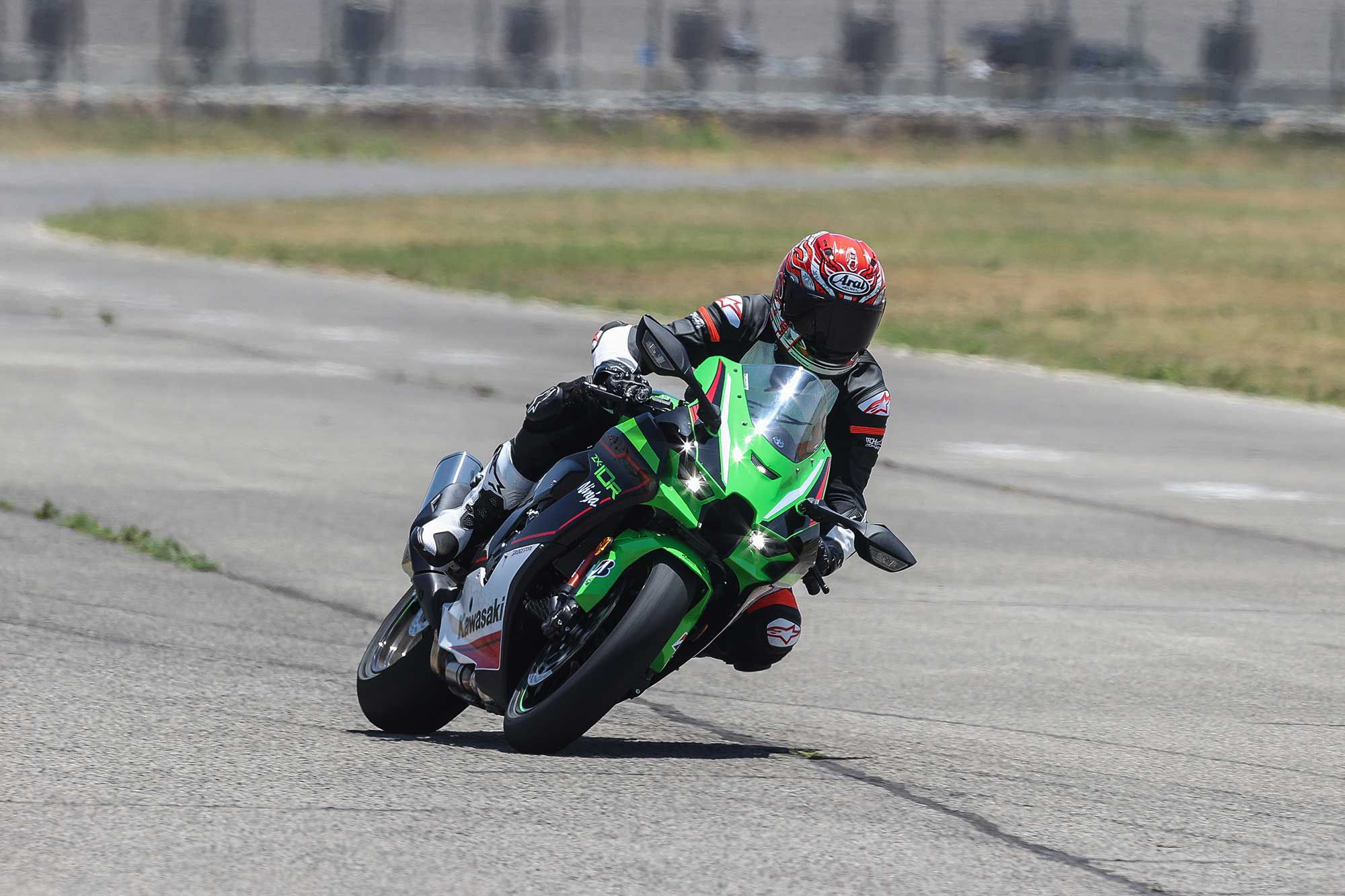 Increased stability aids in bringing the Ninja to a quick halt. There was no brake fade to report during our track session despite the OE-fitted rubber brake lines. (Brian J. Nelson/)

But it’s quick with a sense of calmness, much thanks to the revised cockpit setup. The additional wind protection provided by the redesigned fairing provides a smooth air pocket to tuck behind with minimal buffeting at top speed. In comparison to the previous ZX-10, it’s a serious step forward in terms of reducing windblast, even for this 5-foot-7-inch “racer-sized” tester. The more athletic footpeg position helped in hustling the motorcycle through quick side-to-side transitions, but the added reach to the clip-on handlebars adds wrist pressure during quick braking—however, taller riders may appreciate the extra space. 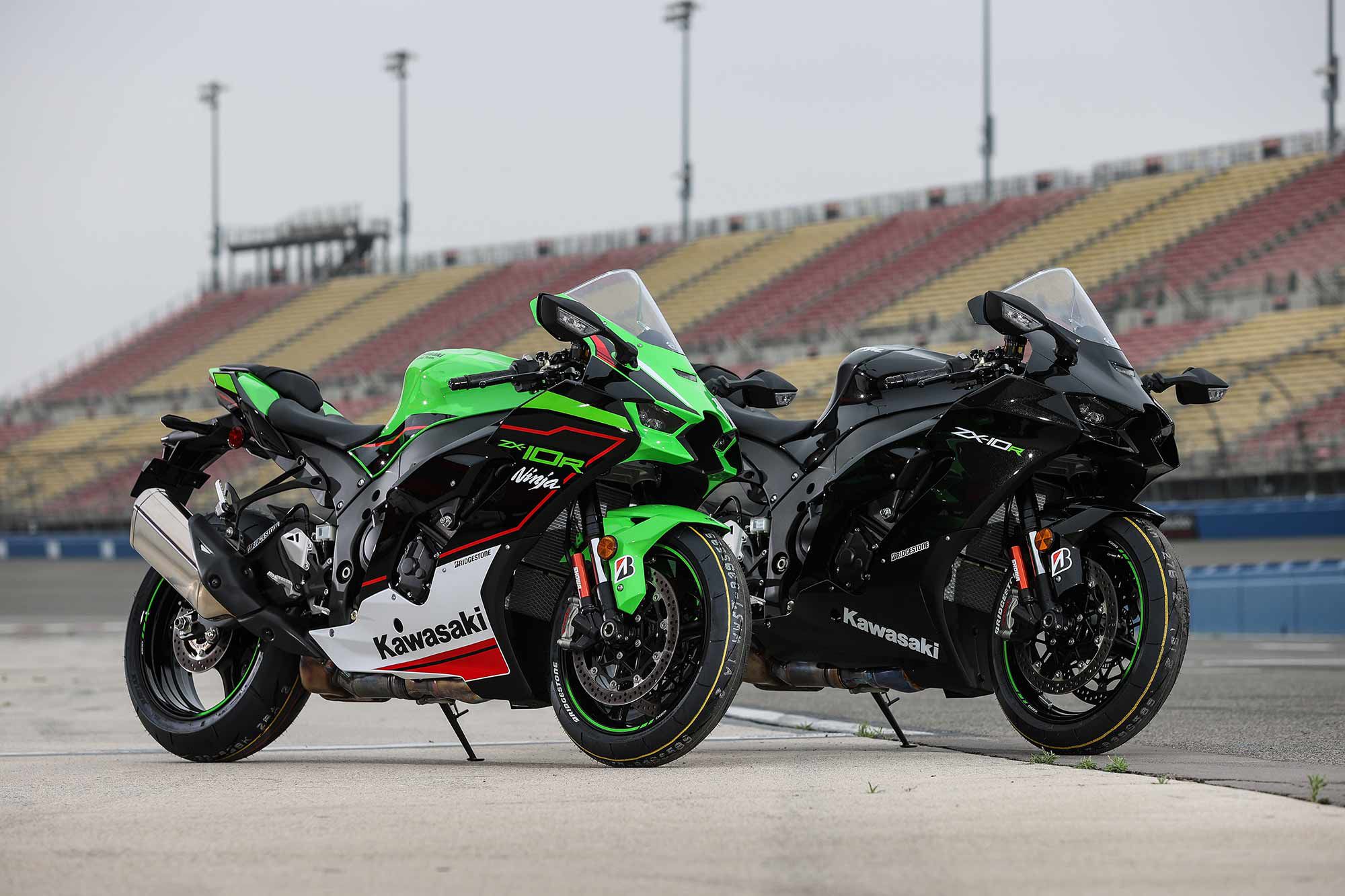 Rather than revolutionizing an already-potent and winning package, Team Green upgraded the Ninja ZX-10R and ZX-10RR with evolutional updates that strengthen its potential within the category, while making an easier-to-ride platform for the majority of riders. It’s clear that you won’t need Jonathan Rea’s raw talent to take advantage of the motorcycle’s improvements.