The Vitpilen 401 brings the same exciting small-displacement spirit as Husky’s Svartpilen, but clip-ons and street-focused Metzeler M5s give it a cafe racer vibe. What it may lack in riding comfort it makes up for in handling.

Husqvarna does a great job at bringing its concepts to life, and the Vitilen is a perfect example. First introduced alongside the Svartpilen 401 concept at the 2014 EICMA show, the Vitpilen went into production just three years later.

Now in its fifth year in production, the Vitpilen 401 continues to strut its stuff as the brand’s small-displacement, cafe racer-styled model. This motorcycle goes with road-focused tires, clip-on-style handlebars, and vibrant white paint compared to its dark, rugged Svart sibling. A 373cc single-cylinder engine, WP Apex suspension, and steel trellis chassis give it nimble, street-shredding capability.

The Vitpilen 401 has seen a significant drop in price over the years. Priced at $6,299 early on, the bike now sells for $5,399. It is more wallet-friendly than ever. (Husqvarna/)

The Vitpilen sees cosmetic changes to its bodywork, including the new white finish, anodized rims, and some changes to the detailing on the side panels.

Husqvarna sees competition not only in its own backyard, with the Svartpilen 401 and KTM 390 Duke, but also from the Kawasaki Z400, Yamaha MT-03, and Honda CB300R.

The ’Pilens’ cafe and scrambler styles balance each other; if the Svartpilen is the yin, then the Vitpilen is the yang. (Husqvarna/)

The 373cc single-cylinder engine is a punchy, exceptionally entertaining powerplant. Twist the ride-by-wire throttle and let the low-end torque and 40 ponies carry you down the straightaway or around tight bends. The quick-revving thumper has no issue getting up to and maintaining highway speeds either.

Its peppy engine is paired with a slipper-clutch-equipped six-speed gearbox. The slick-shifting gearbox is also connected to Husky’s Easy Shift sensor, which allows for clutchless up- and downshifting. 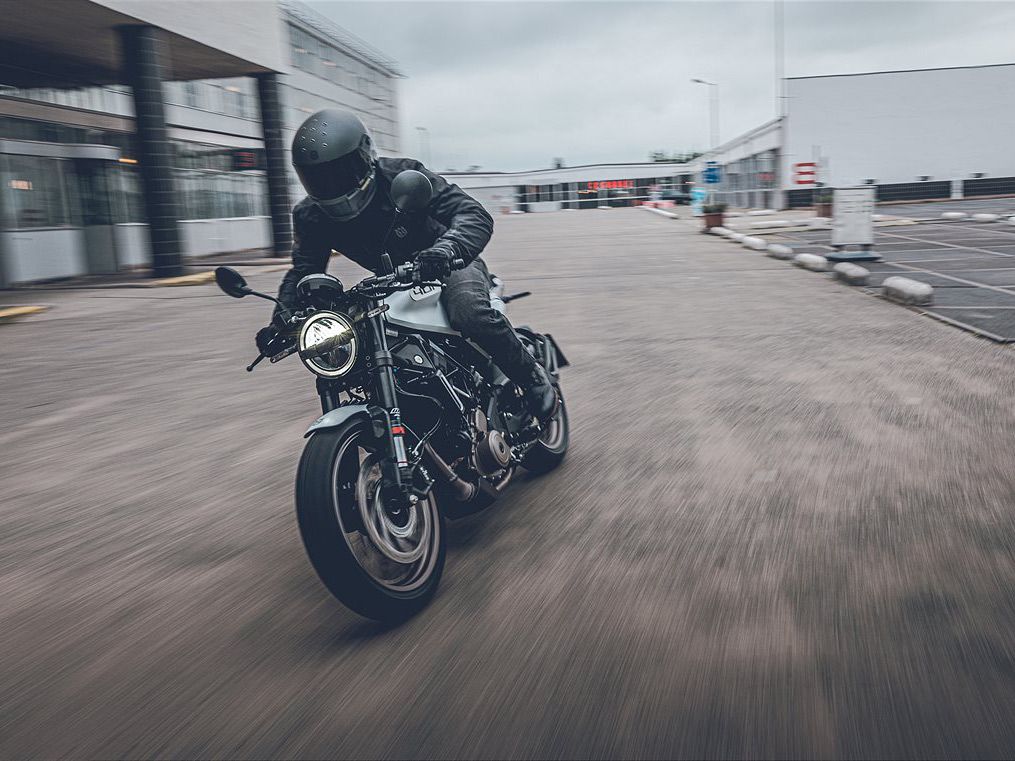 The steel trellis frame and single-cylinder engine are a compact pairing. (Husqvarna/)

Weighing in at just 340 pounds on the Cycle World scales, the Vitpilen is extraordinarily light. This minimal weight combined with a compact steel trellis frame and admirable WP suspension means the bike is easy to flick through quick transitions and extremely maneuverable at low speeds, despite cafe-style handlebars that provide less leverage than a wide, upright bar.

The 43mm WP Apex fork and monoshock are nicely balanced, soft enough to absorb smaller chop yet firm enough to limit jostling on harsh patches. If riders find that some fine-tuning is needed due to weight or riding style, the fork can be adjusted for compression and rebound. The shock is preload adjustable as well.

The ByBre brakes provide strong but not intimidating stopping power. A radial-mount four-piston caliper and 320m disc up front and single-piston floating caliper and 230mm disc at the rear deliver great performance overall. ABS is standard front and rear. The rear system can be turned off with the Supermoto mode. 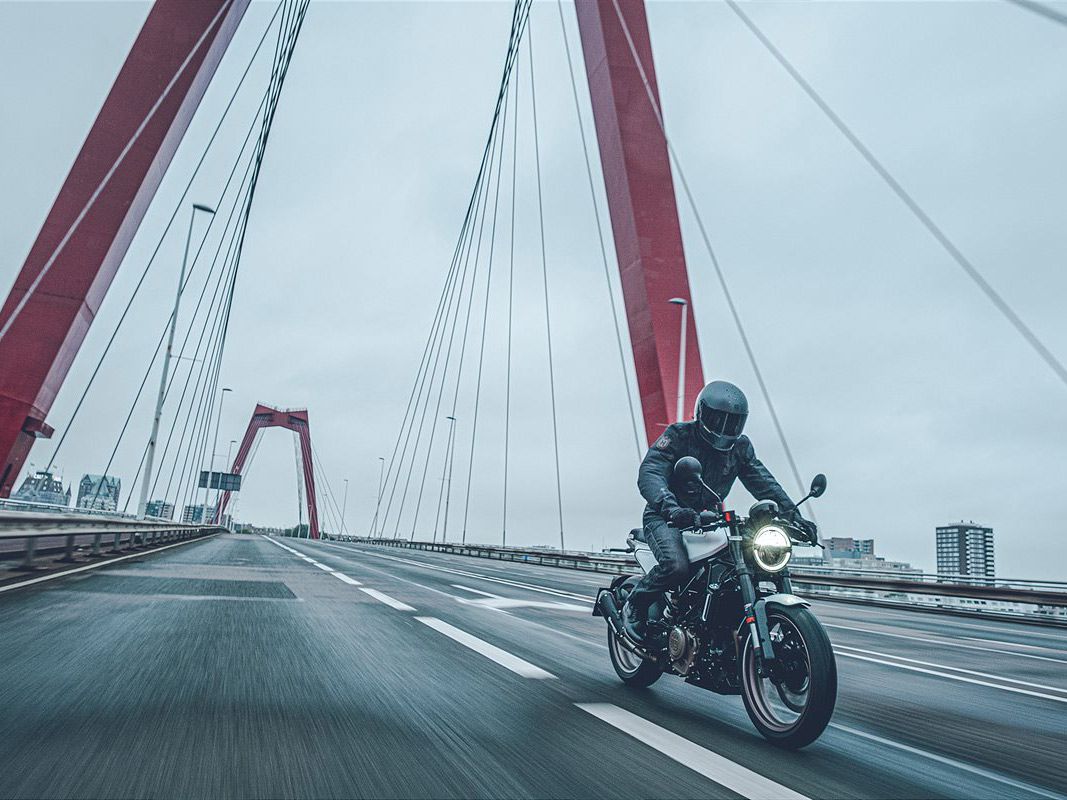 The Vitpilen has a small 2.5-gallon tank but can make roughly 50 mpg. (Husqvarna/)

While we do not have fuel economy figures available, the similar 390 Duke made about 52 mpg, so we can guesstimate that the Vit will have similar fuel economy.

Ergonomics will be somewhat less comfortable than the Svartpilen for many riders due to the clip-on handlebars. Its aggressive rider triangle puts more weight on the rider’s wrists. The younger crowd may not mind, but the forward-canted riding position may convince others to opt for something with a more upright riding position.

The seat height is a tallish 32.9 inches, so short riders will need to balance on one leg or stretch to get two feet down. It’s a naked bike, and therefore not designed for treks across the country, but the Vitpilen’s thin, firm seat is not the most comfortable for that sort of ride anyway.

In addition to ABS and Supermoto ride mode, the Vitpilen has a round LCD gauge and LED lighting throughout. The main complaint with the dash is that it is difficult to read; its small black letters and numbers disappear almost completely in the sunlight.

A premium feature is the Easy Shift function, which allows clutchless up/downshifting. This quickshift system is most commonly seen on bikes double the price, so it’s great to have this as standard on a $5,399 bike. 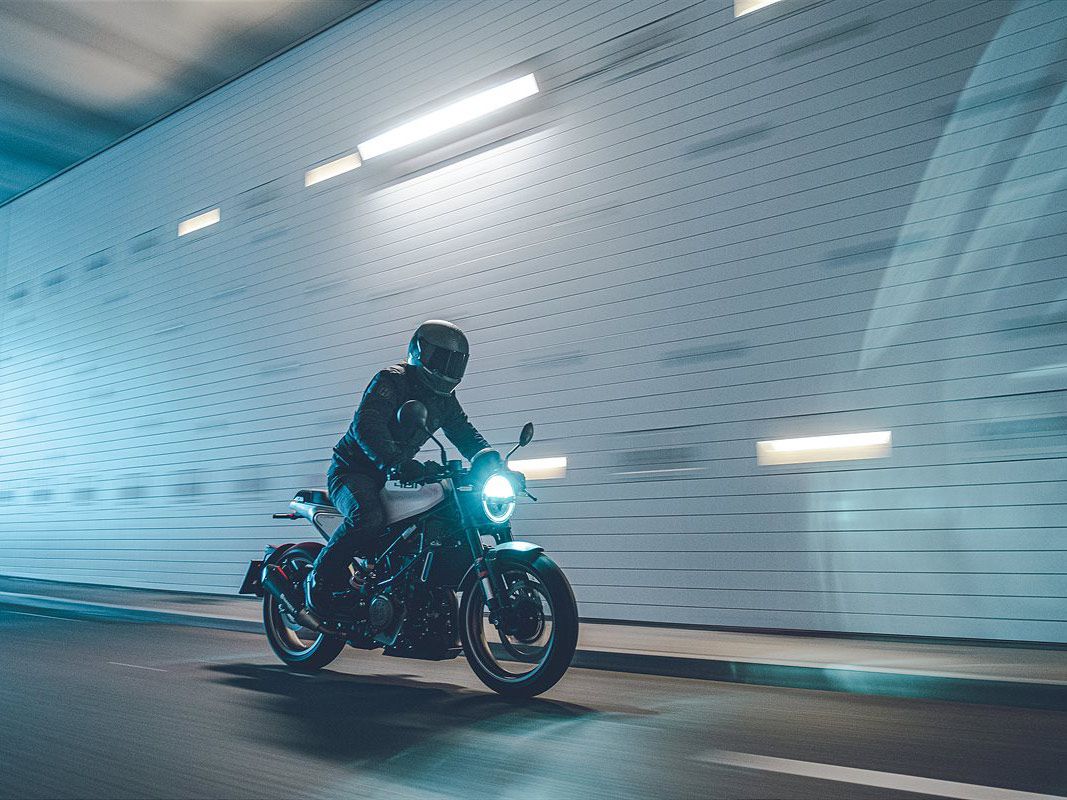 The Vit’s warranty is 24 months from date of purchase or 24,000 miles, and is transferable.

The Vitpilen 401′s fit and finish is nearly as pristine as its bright white colorway. Everything is tidy, and the only complaints are that the dash and seat need to be improved, just as they also do on the Svartpilen 401.