In the motorcycle world, few streetbikes garner the type of attention as Suzuki’s Hayabusa. Long, low, and fast, the GSX1300R is the standard for motorcyclists looking to get somewhere quickly. The ’22 Hayabusa represents a modernized gentleman’s sportbike. Suzuki did this by adding a modernized electronics package and by massaging the motorcycle’s powertrain, chassis, and of course, styling. For the second part of our test, we rode the Hayabusa around the 3.048-mile perimeter course at the Utah Motorsport Campus (formerly Miller Motorsports Park).

In Part 2 of our Suzuki Hayabusa review series we ride it around the 3.048-mile perimeter course at the Utah Motorsport Campus. (Kevin Wing/) A broad front fairing does a fine job of shielding the rider from dirty air at 160-mph. (Kevin Wing/)

Although designed as a streetbike, the Hayabusa is a more capable track bike than its predecessor. Twist the throttle and this 1,340cc inline-four doles out smooth tire-friendly torque. Although the engine cranks out a tad less peak power than its predecessor, you’ll be hard-pressed to notice the difference as you hurl into turn 1. A broad front fairing does a great job of shielding the rider from dirty air. It’s remarkable how comfortable you can be at upward of 160 mph. 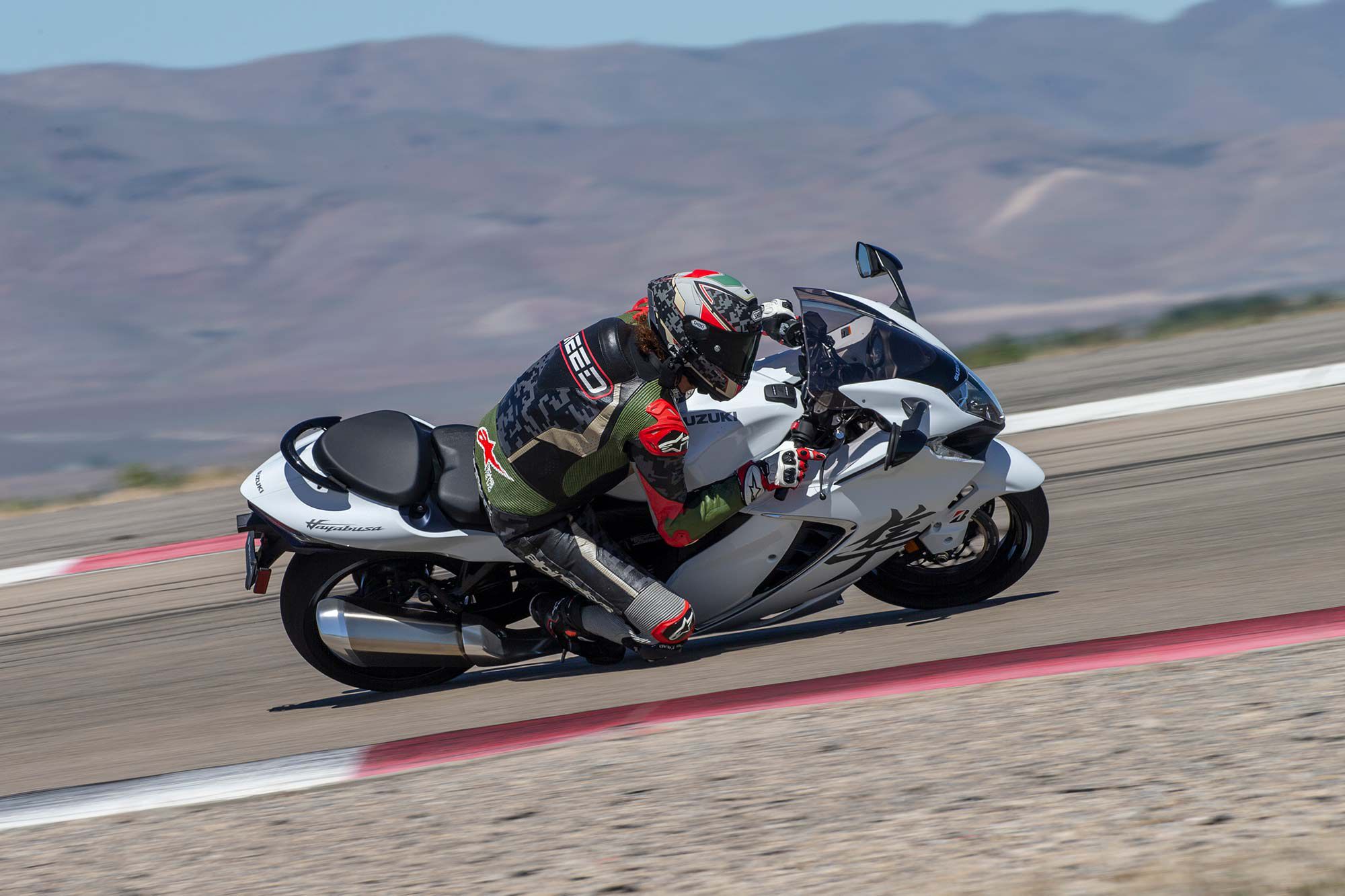 For a motorcycle that weighs nearly 600 pounds, the Hayabusa impresses with its agility. (Kevin Wing/)

Perhaps one of the biggest improvements to its overall track performance is the fitment of Bridgestone’s fantastic Battlax S22 rubber. These tires are light-years ahead of the old BT-015s and provide more grip, faster warm-up time, and a refined profile that complements the updated chassis. It’s worth noting that OE shoes differ from the commercial version in their single compound design. This modification was made to better withstand the ‘Busa’s extra heft (582 pounds with fuel). 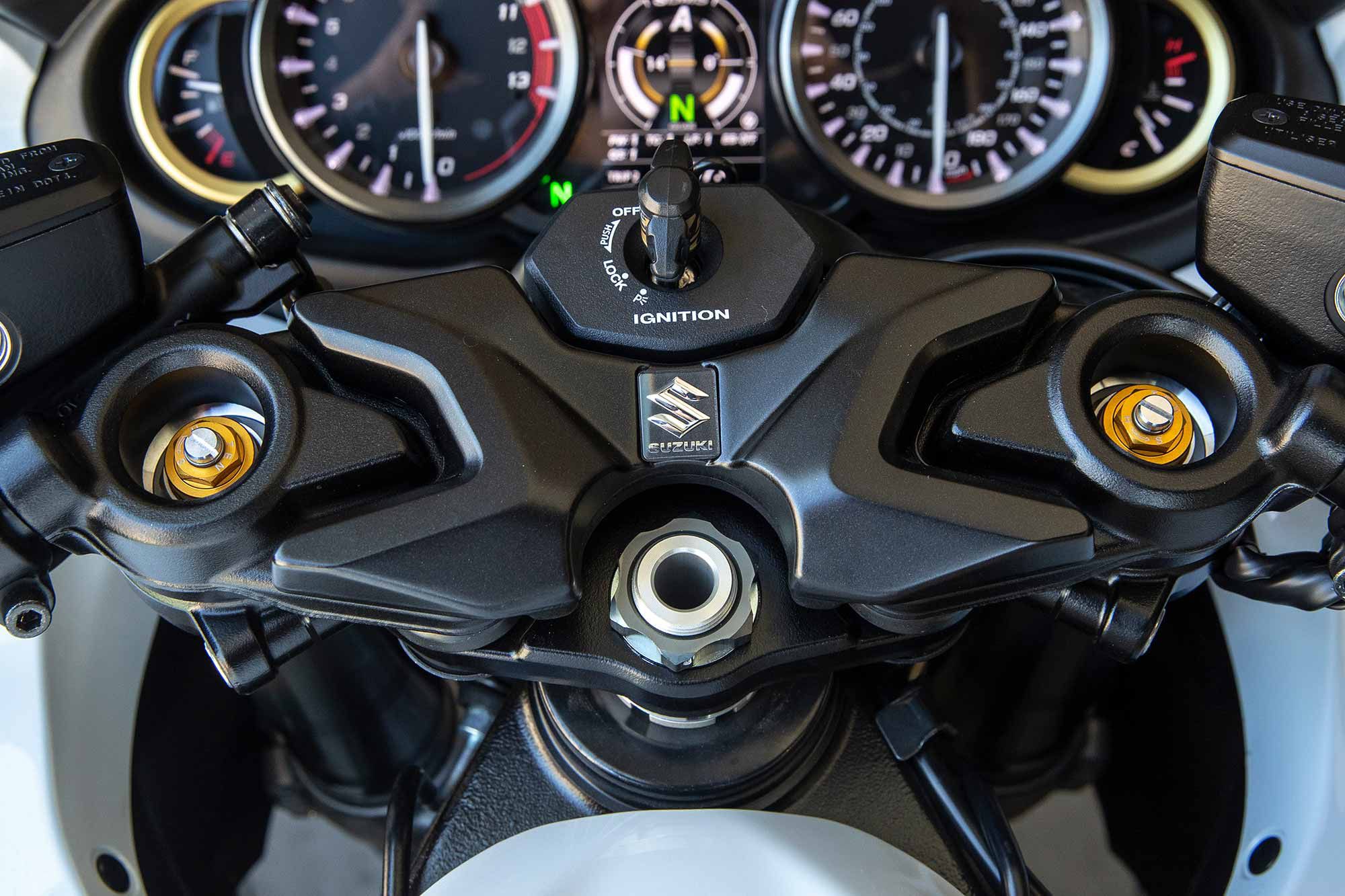 The sum of the Hayabusa’s suspension components net a big improvement both in terms of comfort and road holding even at a more elevated track pace. (Kevin Wing/)

The tires are complemented by improved suspension that floats over the pavement, yet delivers pleasing damping response during full-throttle and brake application. The suspenders still offer three-way adjustment. However, we were impressed with the OE setting. As a side note, we appreciate that the fork employs a more traditional twin spring and damping cartridge setup rather than more budget-oriented versions. 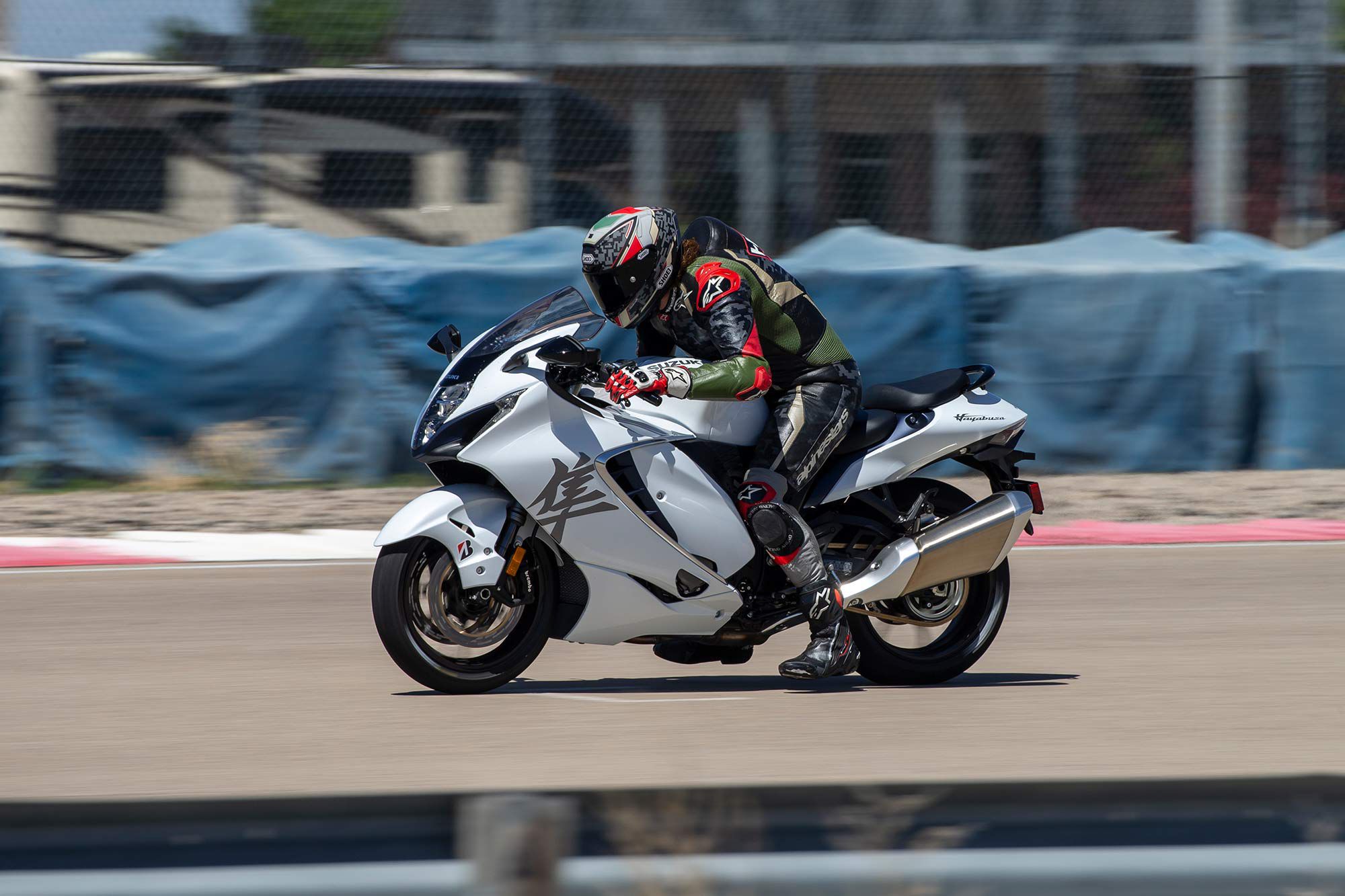 Electronically adjustable launch control makes dragstrip launches easier by holding engine rpm at 4,000, 6,000, and 8,000 rpm thresholds so the rider only has to focus on clutch release. (Kevin Wing/)

Where the old Hayabusa would spin its 190-series rear tire, this one drives forward with considerably less wheelspin. IMU-powered traction control offers eight levels of adjustability, and can be manually disengaged. Level 1 is the sweet spot (least TC intervention). However, we wish Suzuki added more fine incremental adjustment inside this setting. The Motorrad division offers this with its RR bike, so it is possible. 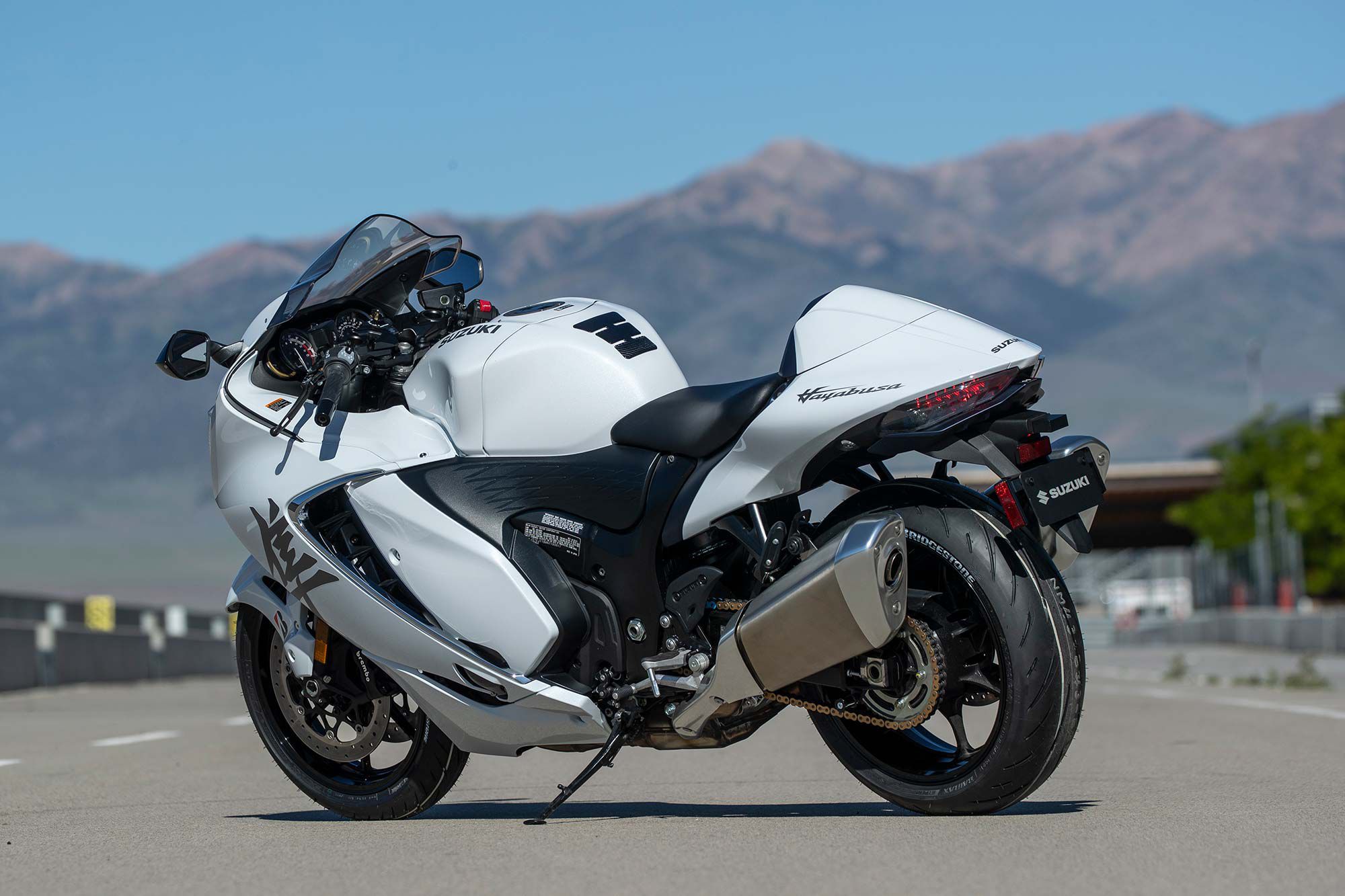 Long, fast, and low—Suzuki’s 2022 Hayabusa sportbike elevates its level of versatility both on the road and the racetrack. (Kevin Wing/)

The Hayabusa also adds wheelie and electronic engine-brake control to its arsenal. Considering its weight and wheelbase, you’re not going to power wheelie off turns like a liter-class superbike. The engine-brake control on the other hand offers a noticeable difference in terms of corner entry. The less the engine-brake setting, the better the ‘Busa feels on initial turn-in. The caveat is that you have to use the front brakes a tad harder to net the same level of deceleration (this big inline-four offers considerable engine-brake force in standard configuration). 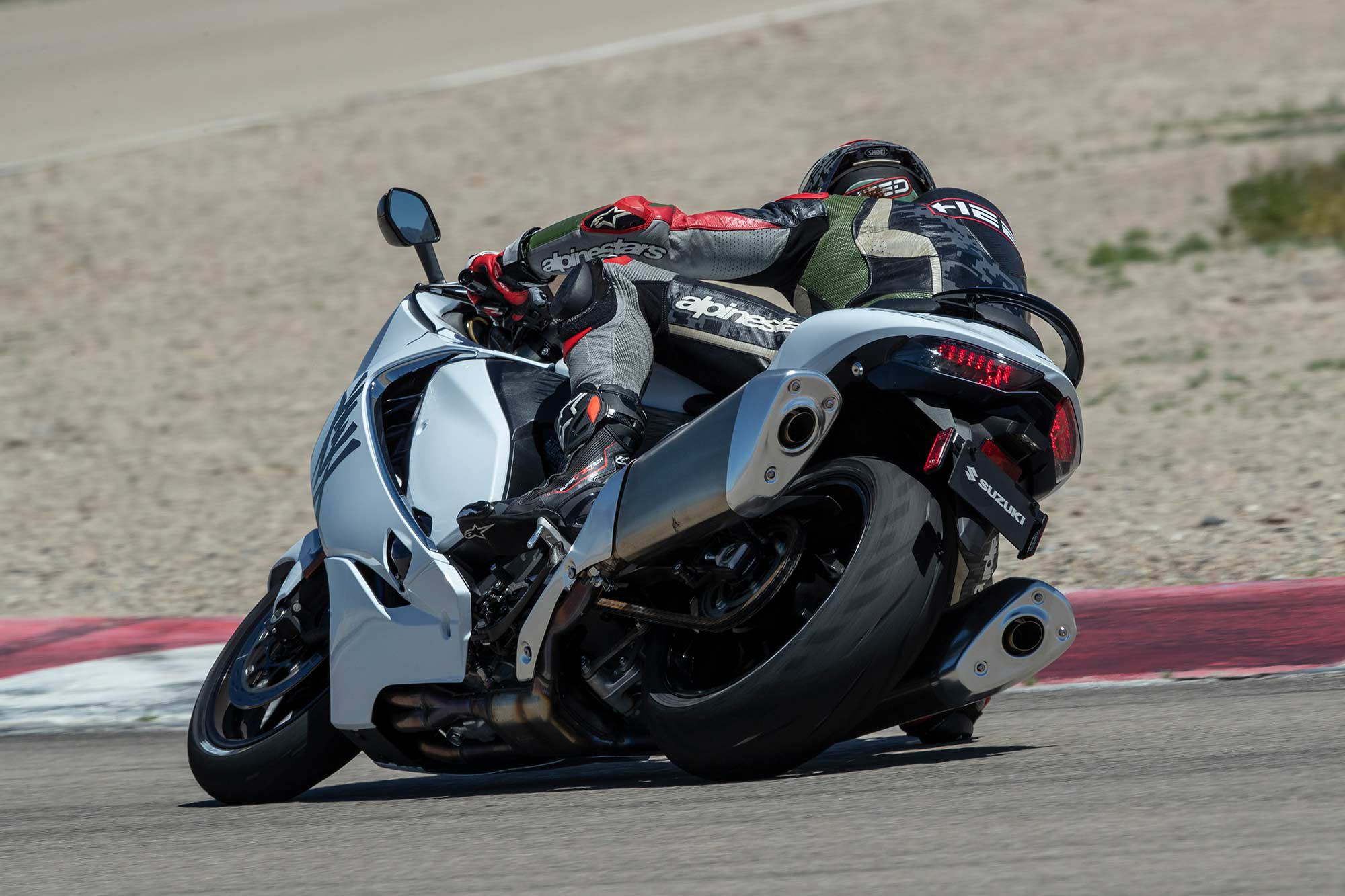 The Bridgestone Battlax S22 tires are a huge improvement. As opposed to the commercial version, these tires make use of a uniform compound to better withstand the extra weight (and speed) of the ’Busa. (Kevin Wing/)

Like the tires and suspension, the oversized front brakes with beautifully machined Brembo Stylema calipers do a much better job of shedding speed. There’s still a minor degree of brake fade after a few hard laps, but it’s manageable. Cornering ABS is now standard as is a linked rear brake that automatically diverts brake pressure to the front brakes. 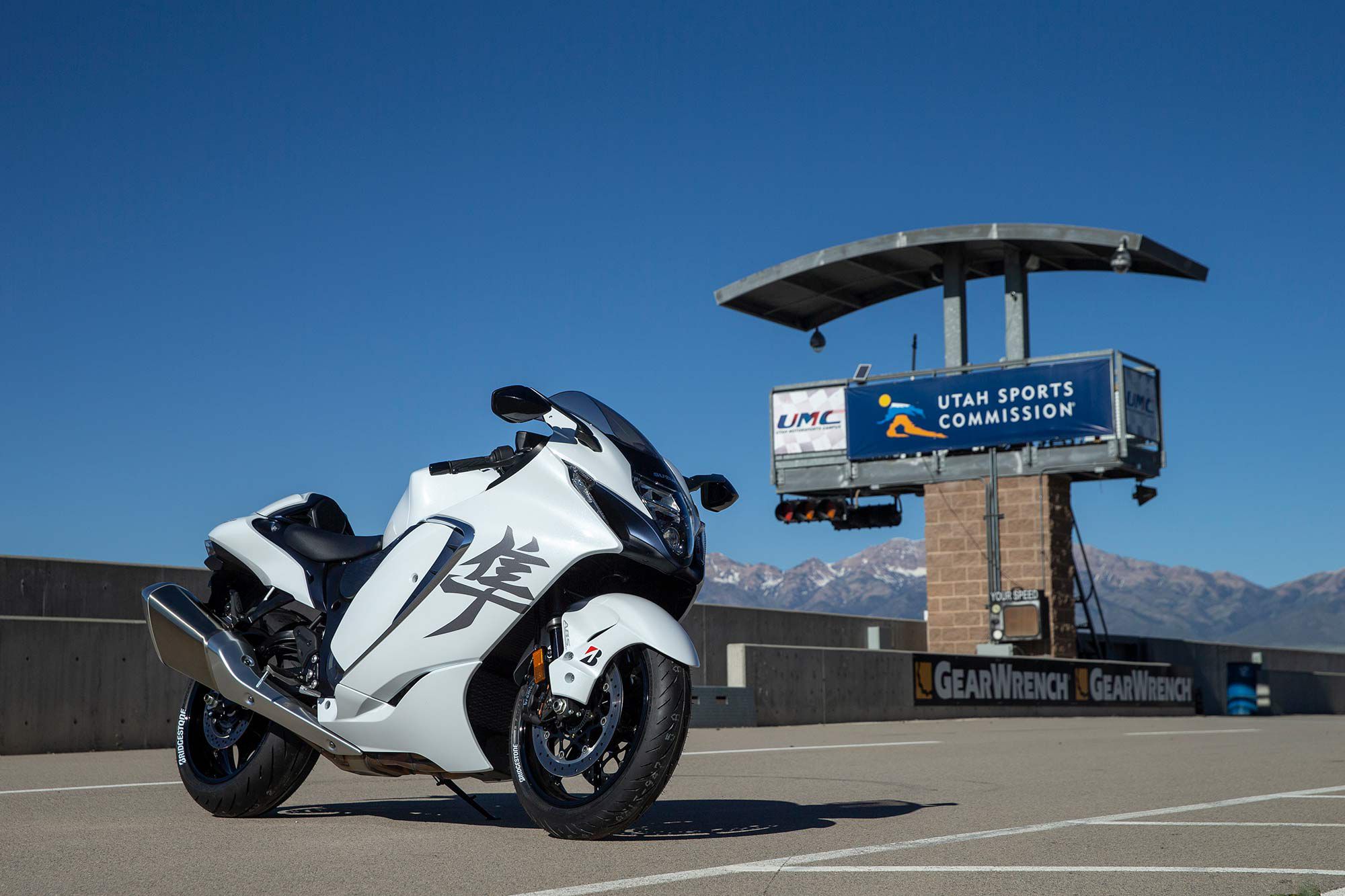 We’re impressed with the polished look and feel of Suzuki’s 2022 Hayabusa. (Kevin Wing/)

Riders who enjoy ripping across quarter-mile dragstrips will appreciate the Hayabusa’s easy-to-use and three-way-adjustable launch control. A slick user interface lets the rider select from 4,000, 6,000, and 8,000 rpm increments. The electronics automatically hold rpm at the preselected threshold with the throttle pinned. This lets the rider focus on clutch release. The system works well, but riders can likely net a faster time by managing the controls the old-fashioned way.

The Suzuki Hayabusa is a hoot to ride at the circuit. It’s way more capable than you’d think considering its size. (Kevin Wing/)

Contrary to popular opinion, Suzuki’s Hayabusa is more than a one-trick pony. Obviously it’s still fast in a straight line. But the new version affords better track capability to its well-rounded résumé. From road to track, the Hayabusa has elevated itself into one of the most comfy and versatile sportbikes available today. The 2022 Hayabusa benefits from oversized front brakes with Brembo’s beautifully machined Stylema calipers. Braking performance is a big improvement, but there is still a hint of fade after prolonged track use. (Kevin Wing/)