Save the date! MotoGP™ Team Presentations are coming

The 2023 MotoGP™ season is almost underway, with an eagerly anticipated date in Portimao setting the scene for the opening round of the campaign later in March. Before then though we have the small matter of the Team Presentations to take care of, where new-look line ups and their bike liveries will be unveiled.

We don’t have to wait long to see what 2021 World Champion Fabio Quartararo and 2020 runner up Franco Morbidelli’s M1 will look like, with the Iwata factory the first side to reveal their plans and machine for the upcoming campaign.

Just a few short days later, we will get a first glimpse of Alex Marquez in Gresini’s 2023 colours as he prepares for his first premier class adventure away from Honda bikes. The former LCR rider will partner Fabio Di Giannantonio in the Ducati satellite team.

Having delivered a first World Championship in 15 years to the Bologna bullets as they completed the 2022 triple crown, Francesco Bagnaia will once again lead the team’s charge for glory. However, there is one major shake up in the side, with Enea Bastianini, who came third last season and proved a worthy adversary to Pecco, now partnering the Italian in the factory team and with his own title ambitions. Ducati will launch GP23 in the beautiful surrounds of the Dolomite mountains in Italy.

Two days later, the other two GP23s on the grid will be revealed as Jorge Martin and Johann Zarco prepare for a third season together as teammates.

Rounding out the opening month of the year’s Presentations are KTM, where Jack Miller and Brad Binder show off their RC-16s.

For the first time since 2019, two premier class Champions will be teammates as Joan Mir joins Marc Marquez on the factory Honda. Incidentally, Honda also saw the last pairing of Championship winning teammates, when Jorge Lorenzo and Marquez joined forces, and the Japanese marque will be hoping that it can prove the winning formula as theyplot a route back to the top of the MotoGP™ world.

One of two new teams entering the fray in 2023, GASGAS welcome Pol Espargaro back to the RC16 and hand rookie Augusto Fernandez a chance in the premier class.

Having made huge strides in recent seasons, the Noale factory come into 2023 as elite contenders after a breakthrough year that saw them claim multiple podiums and a first-ever MotoGP™ victory. Having fallen just short last season, Aleix Espargaro will be hoping to go one further and claim a top three Championship finish if not the title itself, while Maverick Viñales has already proven that he is a force to be reckoned with aboard the RS-GP.

The other new team joining MotoGP™ for 2023, and Aprilia’s first-ever satellite side, sees Miguel Oliveira and Raul Fernandez make up a formidable outfit with the ability to pull off a shock or two.

As of yet, we don’t know when Honda’s satellite team will unveil their machines for the upcoming campaign as Takaaki Nakagami will be joined by ex-Suzuki rider Alex Rins under Lucio Cecchinello’s charge.

We are also still awaiting confirmation for the final pair of Ducatis on the grid, with Rookie of the Year Marco Bezzecchi and Luca Marini hoping to build on last season’s extremely promising campaign. 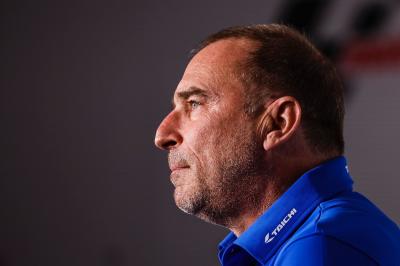